THE HIGHLY-CHARGED conversation between Leo Laporte and Nilay Patel on TWIT 332 features in a classroom discussion during the LIT-Clonmel module on Applied Communications.

Google Is a Medium

FACT: Google is a medium. An increasing number of articles published by Poynter now emphatically underscore the fact that Google is indeed a media company, or a technology-enabled media company with deep pockets.

What's the "1% Rule"? It's an emerging rule of thumb that suggests that if you get a group of 100 people online then one will create content, 10 will "interact" with it (commenting or offering improvements) and the other 89 will just view it.

What's the "1% Rule"? It's an emerging rule of thumb that suggests that if you get a group of 100 people online then one will create content, 10 will "interact" with it (commenting or offering improvements) and the other 89 will just view it. 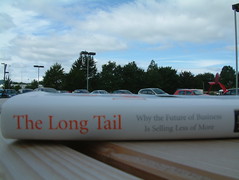 PART OF TODAY'S podcast [Educast 62 27.4 MB MP3] deals with The Long Tail as inches out of its niche and rises closer to a Top 10 placement on the NYT best-sellers list. It doesn't hurt that Tipperary Institute has purchased 10 copies. We talk about the Long Tail along with 38 minutes of other topics. We use the Sony ICD MX-20 without a mic for two segments and our big fat iPod mic for the rest of the show. That's Robin Blandford's snap of the book cover, using his Sony Walkman phone.

CORY DOCTOROW USES AN OP-ED in The Financial Times to explain why those earning a degree in multimedia development need to know how a rootkit works. Doctorow writes:

This past Hallowe'en, Sony BMG compact discs were revealed to carry a digital rights management technology built on a "rootkit", an illicit way to rewrite Windows so it hides the software's existence from the user. DRM technologies are systems for restricting the way that people who lawfully acquire works can use them. If you have ever been unable to print a PDF, watch a DVD you bought abroad or put a song from the iTunes Music Store on a non-Apple MP3 player, that is because of DRM.

Rootkits are vicious: list your files, they do not show up. Check running programs and they are not there. Except they are. Virus writers could--and did--exploit the rootkit's hiding capability to compromise personal computers. What is more, it soon became evident that Sony BMG's rootkit was spying on its users' deeds and sending an account of them to the company's servers. Sony BMG denied this, then changed its story and said it did get the messages but it ignored them, so there was no privacy issue. Thomas Hesse, president of global digital business, merely shrugged: "Most people, I think, don't even know what a rootkit is, so why should they care about it?"

Cory Doctorow -- "Vaudeville offers a music lesson for Sony BMG" in the 12 Dec 06 edition of FT.

What is a DLA? It’s a term I first encountered while listening to Marc Canter when he attended a semantic web event in Galway. If you have seen 360.Yahoo.com, you know one flavour of a DLA. With Yahoo! 360, people can keep track of their own stories, music, photos, video and files—plus they can see all these things when linked to their families and friends through Yahoo!

Guns, Germs, and Steel on PBS

PBS -- The Public Broadcasting Service (PBS) is airing "Guns, Germs and Steel" by Jared Diamond. Winner of the Pulitzer Prize for non-fiction, the Rhone Poulenc Science Book Prize, along with three other international literary prizes, Guns, Germs and Steel has been translated into 25 languages and has sold millions of copies around the world. Recommended.

AMERICAN SCIENTIST -- In his new book on the origins of the PC industry, noted technology journalist John Markoff says the PC revolution between 1962 and 1975 was spawned from cultural upheaval, political ferment and recreational drug use, and that out of that mix came the central idea of personal computing: "the notion that one person should control all of the functions of a computer and that the machine would in turn respond as an idea amplifier."