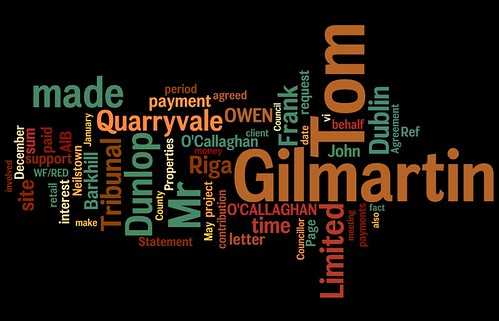 Martha in the LIT-Clonmel  Bureau | 172 words

The Mahon report was set up to examine allegations of payments to politicians and corruption within the irish government. The Word Cloud above shows this very clearly.

The Mahon Report's main focus was on former Taoiseach Bertie Ahern. This is documented in the Mahon Report. Politicians received money from property developers then often made decisions favourable to those developers. Although new housing estates were built, surrounding infrastructure often never received planning consideration.

Today in Ireland, there are hundrends of houses and bulidings around the country that are left uncompleted. In the local area, it's easy to see vacant houses on the Dublin Road overlooking the Rock of Cashel and the same kind of ghost estate near Glenconner in Clonmel, County Tipperary.

For me, a third level student and an observer of the Mahon Report, I feel it was wrong for the government to spend so much money on wages, expenses and pensions. It was wrong to accept money for access to politicians. And it is wrong to be cleaning up the banking mess that evolved on the back of an overheated economy falsely powered by construction. 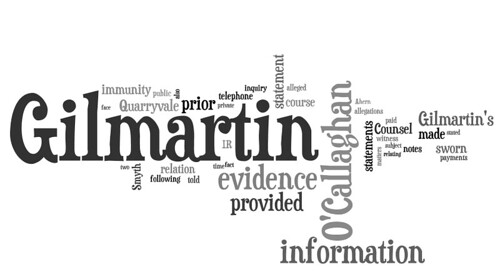 The Mahon Tribunal was set up to help prevent or investigate corruption within the Irish government. Among those that are being investigated are former Taoiseach Bertie Ahern. It is alledged that he took approximately €250,000.

Former European Minister Padraig Flynn is also being investigated for corruption in the planning process (e.g. agreeing to the construction of proprerties that should have not been built). Now in almost every town across the country there are ghost estates that remain half finished or an eyesore to the surrounding communities.

It is the belief of many that their pensions of €152,000 a year should be taken off them and any money that was taken should be paid back and used for vital resources such as schools and hospitals and roads.

In my opinoin I think its unfair for the general public to pay for the damages caused by the politicians in our government. Our country is in a mess and we owe a lot of money to other countries and the general public are suffering through various cuts and there is a lack of trust between the public and their government.

I LISTEN AND LEARN A LOT from Wes Fryer, and really treasure his outline of making multimedia ebooks available under a Creative Commons license from his epublishing wiki.

Information in this blog post may be used only when conforming to the Creative Commons License for Free Cultural Works.
Wes Fryer has a presentation or workshop on creating multimedia ebooks. He delivers it as a three-hour workshop, 1 hour interactive videoconference, and downloadable podcast. Learn more at learn.playingwithmedia.com.

Workshop description: Learn how to create enhanced/multimedia eBooks including digital text, hyperlinks, images, and embedded videos. In addition to using Apple Pages software (part of iWork) participants will learn how to use Calibre software (free and cross-platform) to convert multimedia documents into a variety of eBook formats.

Wesley's eBook, "Playing with Media: simple ideas for powerful sharing" is available in 3 formats for iPad, Kindle, and other eReaders including Nook.
This presentation is available as a 99¢ video podcast.
ELSS 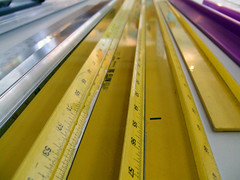 measuring is the process or the result of determining the ratio of  hysical quantity, such as a length,time and temperature. while counting is trying to figure out the number of things, or how much things cost.

Measuring is more important than counting becasue it gives you an accurate measure or balance of things. e.g it is important to measure how many tiles you would need for your kichen floor, than to try and count how many tiles are needed.

Burn The Ships!  Cortez did and history tells us what became of him.  Previously used models for communication and marketing still exist but society is slowly moving toward the idea of Digital Interaction to make a statement or carry out a campaign.  What do you need and how do you deliver?

Interactive and deliverable content works well when all the stakeholders have a good grasp of the fundamentals of Digital Media.  All fields where fast communication of an idea is the ultimate end result need to fully grasp the nettle 0f 21st Century digital media platforms and utilise their knowledge of these platforms to gain a larger slice of the pie.