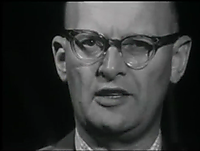 ARTHUR C. CLARKE was uncanny in his prediction of life in the 21st century. He spoke on the BBC's Horizon programme in 1964 about things he forecast 50 years away. "We could be in instant contact with each other, wherever we may be, where we can contact our friends anywhere on earth, even if we don’t know their actual physical location," he said. He thought like Online Meeting Rooms thinks: "It will be possible ... for a man to conduct his business from Tahiti or Bali just as well as he could from London. Almost any executive skill, any administrative skill, even any physical skill, could be made independent of distance." I wish I had reached a point where I did not have to commute to meetings hundreds of miles away but in 2009, we still have to put ourselves in a face-to-face format if we expect to close deals.